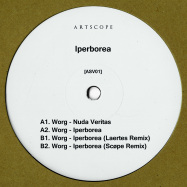 Iperborea (in English Hyperborea) is a legendary land, home of the also mythical people of the Hyperboreans. In the myths of Greek religion, the Hyperboreans were a people who lived in a distant land to the north of Greece. This region was a perfect country, illuminated by the shining sun for six months of the year. The Ep opens with the track -Nuda Veritas-, characterized by sound textures that recall an aquatic and evanescent environment, giving the track a charge of mystery and the unknown. Then the Journey goes to -Iperborea-, which gives the album its title, there are strong references to the power of the Sun and the mythical people of the Hyperboreans. The first is given by the constant presence of a modulated niose that simulates the solar wind, that is a flow of particles emitted by the Sun. On the other hand, the reference to the mythical people is made through a pressing and epic groove, and by the contrast of these two elements with a pad/stab synth that transits in the middle of the track. The latter outlines a dreamlike and suspended atmosphere that praises this distant and legendary land that was Iperborea (Hyperborea). Among with these original tracks, the EP also containes remixes by Scope and Laertes. Laertes rexmis is focused on soft and gentle mysterious mood while Scopes one is more focused on mysterious but powerful which makes audience imagine somewhat aspects of a destructive god. Together they are making a perfect pair match for this EP>